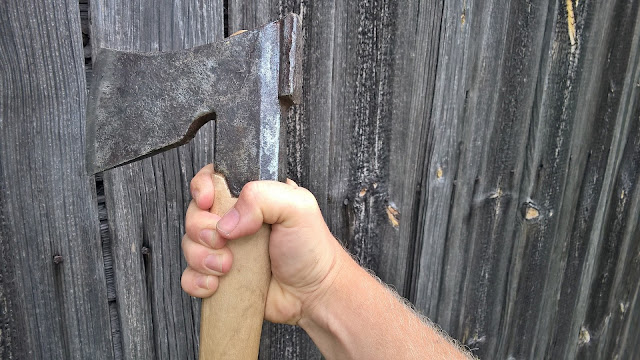 Growing knowledge of Finnish made axes has created a wide market for these vintage tools. The Kemi-model axe made by the Billnäs Forge in Finland is among the most coveted traditional Finnish axes. The Kemi model is also known as the “twelve”, due to the serial number given by the forge. These axes were manufactured from the early 1900s up until the early 1970s. Over the years the model experienced some small changes in design. The size of the socket and in the thickness of the blade were modified over time. Generally speaking the “Twelve” progressively became slightly lighter in time as metal quality and forging technics improved.


Billnäs was not the only company to make these axes. A rival company, Kellokoski-Mariefors also made similar axes as Billnäs with identical labeling. However, Kellokoski struggled with steel quality issues which gave the company a bad reputation among loggers even if both companies provided an extensive warranty service. Kellokoski was never able to compete with Billnäs who was the market leader in axes.


Axes were in general sold without hafts up until the 1940s as everyone was expected to make their own hafts to fit the axe. The axe hafts became more standardized in shape and perfomance during WW2 when Finnish soldiers posted along the Sovjet front made use of spare time in between battles for making crafts such as axe hafts. Good axe hafts were necessary for the families back home who relied on firewood for warming the houses and to cook food. Different courses in haft making were organized for the soldiers using templates recommended by experts from the Work Efficiency Society.

The Fiskars company became a majority shareholder in the Billnäs Company in the 1920s but the production of steel goods in Billnäs continued as usual up until 1957 when the Fiskars company finally took over the whole factory. At this time the Fiskars company modified the manufacturing process of the ”Twelves”, which were now made out of cast steel. The labeling of the axes also changed; the number “1” was added to the make number 12 and the slash was removed. A 12/2 was now labeled as 1122 and was in production until the early 1970s when it was discontinued and replaced with a new series of axes. The Billnäs name remained stamped on the axes for a while, but by the 1980s the Fiskars company had replaced the Billnäs print with it´s own name.

Rapid modernizations in forestry and the lumber industry were to blame for the disappearance of the twelve and many other native axe types in Finland. The chainsaw grew in popularity and axes became obsolete. Axes were henceforth mainly used for splitting fire wood and manufacturers needed to manufacture axes that would function well for that single purpose. Also people became less capable of tending to their axes such as mending hafts or sharpening blades, therefore the axes needed to be drurable as well as simple to maintain. The most resent Fiskars series composite haft axes are the result of this development.

12s and other Finnish made axe heads are still found in Finland, but there is a great variety in quality and condition among the axes that are made available. Typically axes are sold in garage sales and at flea markets. There are few things any eager pursuer of a Finnish axe head should be aware of before buying one online.


First off a photo, even if it is a good one, will not necessarily tell you if the axe is in good condition. Cracks and other damages can be hard to spot from just looking at a photo. A twisted blade is also hard to determine from a photograph, but will make life hard for anyone hafting the head. Rust is not necessarily a problem as it is easy to clean off, however rust might cover up cracks and therefore rusty axes should be avoided unless they are cleaned by the seller.

The blade and the poll are good indicators of the condition of an axe. The iron on the poll is soft and will mushroom easily. The poll is design to be used for hitting wooden stakes and wedges, it will not withstand hitting on hard steel wedges or rocks. If an axe has been used frequently as an hammer the poll will mushroom and potentially cause cracking along the sleeve. Hammering can also smash the sleave and render the whole axe useless.
An axe head might have withstood considerable abuse which is visible in a worn down blade and a beaten upp poll. The poll on the 12 is made of softer iron which is intended to absorb some of the energy of a strike and in doing so keeping the socket from being deformed. A deformed socket will make hafting difficult if not all together impossible.

The amount of wear on the blade can sometimes be hard to determine for the untrained eye. The "Twelves" were designed to withstand a considerable amount of wear, but at some point the axe will become too short to perform well and needs to resteeled or reworked by a blacksmith. It was common to send worn axes back to the facory to be repaired as this procedure only cost half as much as a new axe head. The worn axes were refitted with a new carbon steel blade which was forge welded on the head.

Axe heads that bear the mark of this procedure are occasionally sold and easy to identifie due to the rough, but functional workmanship.These reworked axes are usually without issues and will perform well. The forge welded joinery is often clear as the axes were seldom cleaned and polished after the procedure.

Another similar, but less expensive procedure is the rehammering of the blade, but this procedure was not done by the large companies, rather they were attempted by local smiths in crude forges. In this procedure the blade is streched out by hammering. Axes that have undergone this procedure are recognizable as the blades appear thinner and there are clear hammering marks on the cheeks. This is actually a good way to repair an axe, but some of this type or repaires are too crude. An experienced blacksmith can, however, remold beautiful and fully functional heads using this procedure.

Any issues regarding the quality of the metal are almost impossible to determine just by looking at a picture of an axe. Powergrinding marks on the blade might indicate that the temper has been drawn from the blade due to excessive heat by the grinding process. This latter damage can be assessed by pulling a good hardened metalfile across the sede of the blade and feel how if it cuts in to the hardened metal, if it glides it´s an indication that the temper might be noneffected.

Some axe heads that are sold today might have originally been sourced from a factory back storage after the production halted. This can be a problem since failed series of axes were usually stored at factories for reuse. Luckily there are few of these axes around as most were sold as scrap metal when the factories closed and only few survived the scrapping.
Axes with basic quality issues in the metalcan be identified by cracks and breaks in the tip of the blade. Often this is an indication of a failure in controlling the tempering process. This can be corrected by a skilled blacksmith who can retemper the head. Other issues regarding the quality of the metal can not be corrected.

Most online sellers are honest but not all sellers of vintage Finnish axes are capable of determining the true quality and condition of the axe they are selling. There is no standardized system of determining the amount of wear on an axe. One seller might claim an axe is in excellent condition while another one would say its in a slightly used condition. Also the seller might be unaware of the make of the axe due to the stamp being worn out by either corrosion or use. Kellokoski axes and Billnäs axes are often confused with each other. Also the model of the axe might be misrepresented - A 12/2 can be put for sale as a 12/3. Possible damages inside the sleeve of the axe can be overlooked or ignored by the sellers. Buyers should be aware of these challenges when looking to purchase vintage axes.
Getting a completely new axe made by a professional blacksmith is possible but incredibely expensive. The model made by the blacksmith can also be very different from the original axe. A less expensive alternative is to look for vintage axes that have been processed by a proffessional blacksmith. These repaired or rehammered axes usually come with a new maker´s guarantee covering any damage resulting from flaws in the manufacturing process.
The good news is that more Finnish vintage axes are becoming availabe for international buyers and axe quality awarness is improving, making it easier for axe hunters to find suitable heads or ready hafted traditional Finnish axes at resonable prices. However axe hunters need to be mindful when browsing the internet for an suitable collection piece or a functional bushcraft axe. A high price does not always determine high quality. Avoid buying pricy axes from buyers that provide little information of their condition or quality. Happy hunting!

Foreword The following post is intended as a more academic source of information on traditional sealing in Finland and the Northern Baltic...