The bows used in Finland and parts of Scandinavia during historic times were of a composite design and with strong Asian influences. This bow type occupied a wast range of territory from the Northern rims of the Pacific ocean to the Atlantic coast of Scandinavia. 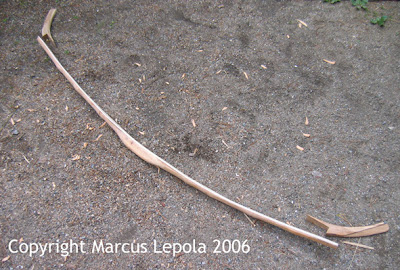 There are some variations in construction and design of this bow type and it can be divided in two subcategories, the Finno-Ugric composite bow and the Siberian composite bow. A common term for these two types could be North Eurasian composite bows.

Both subcategories are very similar in shape and size but they are constructed differently. The Finno-Ugric composite is a wood lamination constructed by joining two or up to four different pieces of wood. In Finland and among the Saami the back was made out of birch and the belly out of pine, cut out of a tree that had grown in a slant position and thus produced a special reaction wood that is much darker, harder and more saturated with sap than normal pine. This type of reaction wood pine endures a lot of compression but breaks easily. The birch slat that is glued on the back endures a lot of stretching and keeps the bow intact. The rigid siyahs are either added to the bow or are shaped of the prolongued ends of birch back slate. 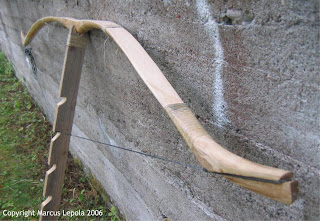 As the perch skin glue that was used to hold the parts together is very sensitive to moisture the finished bow was wrapped in birch bark. The covering also aided in holding the bow intact even in cold dry weather when the wood became more brittle. The range of this model extends from Scandinavia eastward to the middle ground between the Ob and the Yenisei river.

Establishing the boarder area at the Ob river is based on the studies of the Finnish ethnographer U.T. Sirelius, and he also recognizes the Finno-Ugric bows as a distinct type. His studies only range as far as to the Khanty who live along the Ob and their bow is of the Fenno-Ugric subcategory. 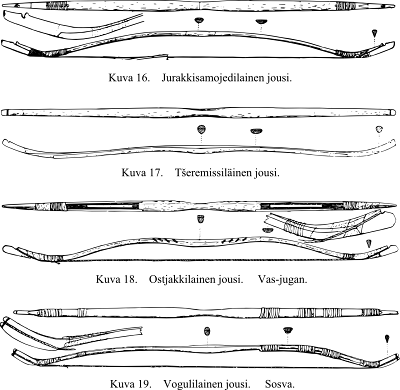 The Siberian bow type was found in the eastern parts of Siberia all the way to Pacific Ocean with some interesting intermediary forms along the borders. This bow type also occurs in some unique variations among Siberian Eskimo.

The Siberian composite bow appears almost identical to the Finno-Ugric model, but there are differences in construction. The bow is usually made of one piece of wood with recurved ends. The bow is fitted with a sinew back covering. The sinew backing or the whole bow is sometimes covered with rawhide or thin strips of birch bark.

The composite design seems to have reached Scandinavia from the East in the iron age, a discovery of a part of the bow-belly from Finland was dated to 200-300 years B.C.

There are nine archaeological findings of Finno-Ugric bows from Sweden, Norway and Finland. For most parts the findings have been dated to iron-age and medieval times.

Bows are constructed in various lengts, and some are actually quite long, one Khanty-bow in the museum of Zurich is 195cm. For most parts the bows where constructed to be as strong as possible as the arrows used were also heavy.

- October 19, 2010
Email ThisBlogThis!Share to TwitterShare to FacebookShare to Pinterest

Foreword The following post is intended as a more academic source of information on traditional sealing in Finland and the Northern Baltic...